You are here: Home / Uncategorized

These Books Document my Entire System 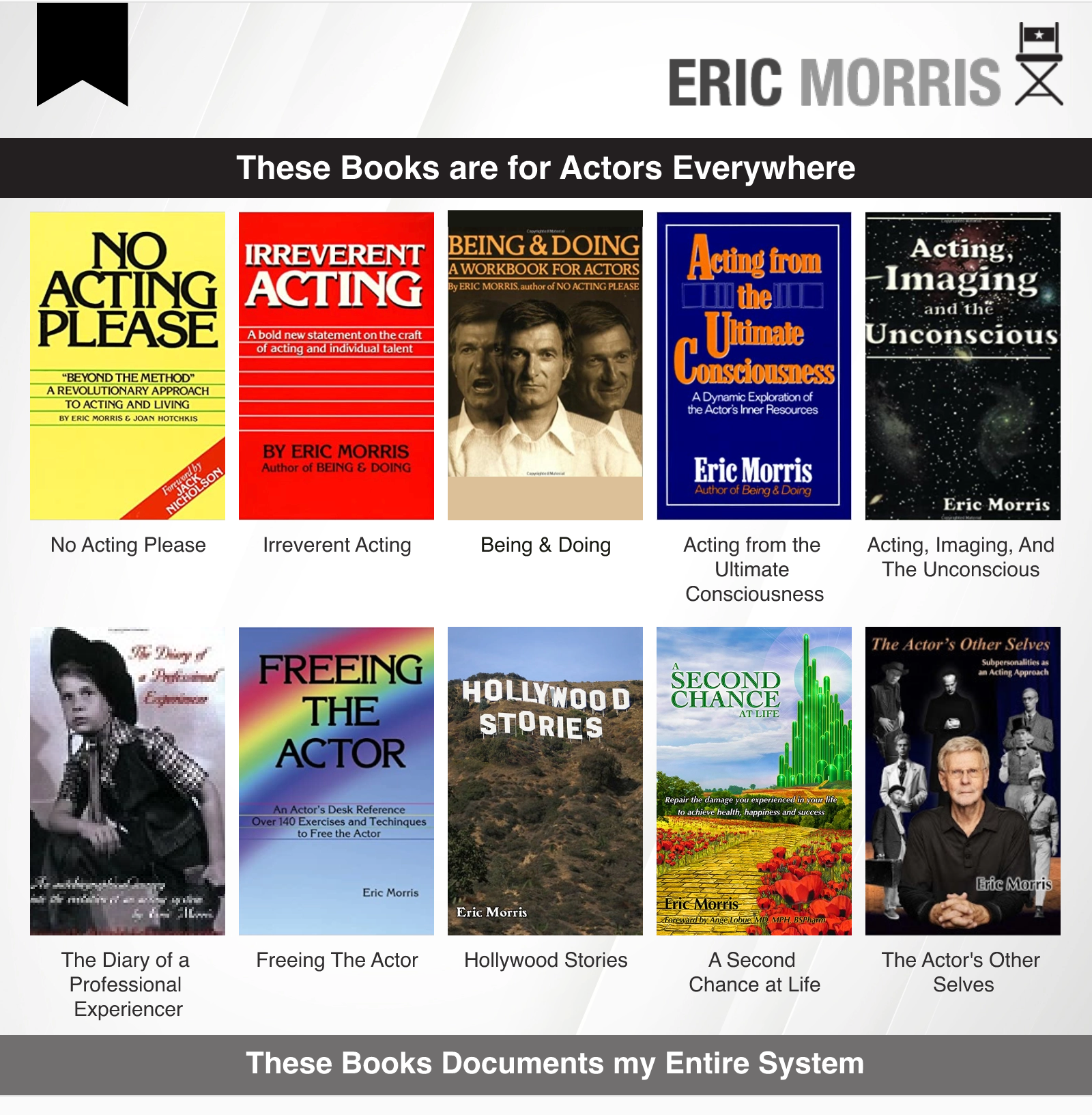 The New Year started out with a bang, Susana and I returned from our holiday vacation in Carmel, California on January 15th and jumped right into teaching all three Classes, Privates and Intensive. Everyone was so happy to be back, you would think by their response that we were gone for a year! In February our brand new website was launched (www.ericmorris.com) created by the very insightful and talented Bjorn Wallman who had been building it for the last five months. I love it. I feel like I moved out of the twentieth century and into the twenty-first.

Last weekend we did a “Mini Jamboree on Sub-personalities.” We spent three and a half days at the UCLA Conference Center in Lake Arrowhead. There were sixteen participants.  They all did a scene and a monologue using a specific Sub-Personality as a choice and choice approach. Their work was transformational. We also explored seven techniques for accessing various Sub-Personalities starting with “Voice Dialogue Facilitation “and went from there to the six other approaches. Everybody left floating three feet off the ground as the result of 36 hours of intensive work. They were still experiencing the impact of the weekend in the next week’s classes. In our two-hour lunch breaks they were able to enjoy the paradise that Lake Arrowhead provides: UCLA Conference Center has tennis courts, volleyball courts, a hot tub and a beautiful lake to walk around. The lodging is five-star, they provide three gourmet meals each day, and the staff treats us like royalty.

My new book Hollywood stories is in the process of being formatted as I write this. It is a book full of interesting and sometimes shocking stories about my incredible experience in Hollywood over these year and the actors that populated the film industry – including humorous stories and Hollywood tragedies!

Many of the actors I wrote about are gone and finding out about them will be an important history lesson for the younger readers.

Last week I had lunch with a former student who was in my class in the middle sixties. His name is Greg Mulavey and he is the most “workingest” actor I have ever known. He is always doing a play here in LA or in New York. He has done hundreds of TV shows and films and was one of the leads in the series “Mary Hartman, Mary Hartman”. He has amassed over one hundred and ten plays because he never sits idle and waits for his agent or manager to call him. He loves to act and is always acting in something. He is now doing a play with Marlo Thomas and they are waiting for a NEW YORK theater to become available. They are doing the play in other parts of New York State in the meantime. I think that if Greg didn’t find a play or a TV job he would find a busy street corner in New York to do a one man show. He also teaches an acting class in New York using a lot of the work he learned from me. One of the reasons I am including this story about Greg is that I hold him up as an example to my students as someone who is totally proactive in pursuing acting work. I asked him to come and speak to my people that night after we had lunch. He told them that they must seek work and not expect other people to supply it for them. You cannot sit by the telephone and wait for an audition, you must read the trades, go to Equity, read the bulletin board and see what is casting. Read “Backstage”. Get into a marketing group like “Actors’ Network”. Talk to other actors and see what they are doing. Many years ago I was crossing Crescent Heights on Sunset Blvd and ran into Jack Nicholson, an old friend and classmate at the time, who told me to run over to Producers Studio, where Roger Corman was casting a film, and I should go read for it! I told him that I didn’t have an appointment and he said “GO ANYWAY, you will probably get a chance to read for the film”. I did go and I did read for it and I didn’t get a part but I auditioned because someone told me about it!!

Become your own agent and manager, you are the top of your list so go out there and work. Remember training never ends, you must keep growing and if your instrument is free and you have a craft nothing can stop you.